Time flies when you’re having fun. Or work super hard with your community to make sure the game you’re developing will meet all their expectations. And that’s exactly what The Farm 51 devs have been doing since the Chernobylite Early Access launch back in mid-October 2019. A year later, the game is incomparably bigger (in content), better (when it comes to features), and more bada… erm… you know where we’re going with this, so without further marketing babble, let’s jump straight into all the juicy details, shall we?

For starters, watch the brand-new Chernobylite console announcement trailer above, confirming the game will launch not only on PC and current-gen but also next-gen consoles.

Hopefully, it’s convincing enough for you to consider purchasing the Early Access version of the game available on either Steam or GOG.com. Especially that it’s now 30% off – and the last discount before the game’s launch planned for 2021.

Bringing Chernobylite to next-gen consoles will be possible thanks to the term-sheet The Farm 51 studio has just signed with All in! Games. Thanks to the cooperation, the game will get many more distribution channels (including streaming platforms) and will be professionally localized in more languages than originally planned. Before this happens, however, you can already enjoy another massive update that has just been added to the game. This Mega Patch is the penultimate one before the game’s content is complete, and here’s what you can expect from it:

Dig deeper into either Olivier’s or Olga’s story. Or explore both to add new plot pieces for discovering Chernobylite’s mystery.

Two new levels, and additional locations on the already existing ones, to be discovered

Fractal World “The Woman in the Red Dress” is the conclusion of a new investigation on the board, and “Stealing Adrianna’s technology” will especially be enjoyed by those of you who asked how Igor got his VR helmet. On top of that, you’ll be able to explore additional locations added to the levels you already know. So make sure to revisit them and find them all. Just remember – you’ll need one of the new “toys” for that. 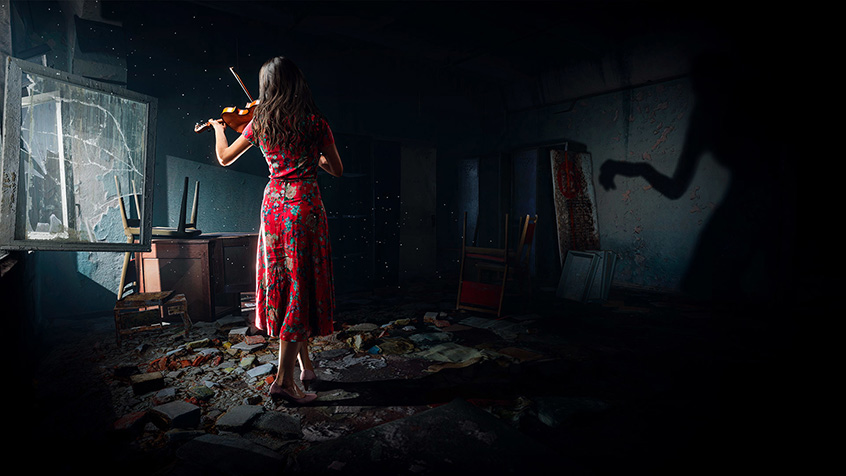 And yes, by “toys” we mean new weapons!

Test either the Chernobylite Blaster or enjoy the Anti-Chernobylite Burner that will help you to access the already mentioned new locations. Warning! Don’t visit them unless you’re not ready for a whole load of new events, as we’ve added over 40 of them within all levels.

Get ready for a perceptible change in the way soldiers behave when patrolling and searching for you. But most importantly, beware of the Black Stalker, as fighting him now is a real challenge. Mark our words.

Check how much of your feedback was implemented in the game

In short: you talked, we listened. And then added changes to the game, re-designed, iterated, and overall made sure that Chernobylite truly is a joint effort – it’ll be as much your game as it is ours. This means that, among other things, we’ve enlarged the base with an area that was previously flooded with water. We’ve also completely rebuilt the looting system. Now, what your opponent’s drop should be both more interesting and better suited for the challenge. Since you didn’t really like the possibility of building cover while exploring the Zone, we’ve replaced it with the possibility of building machines that have a global impact on the area.

Following your request, we’ve also added the ability to toggle aim and crouch, as well as an alternative way to use the dodge ability. And that’s the tip of the iceberg when it comes to the number of changes this Mega Patch brings, so dive in here for the full changelog.

And if you want to see how the developers summarized the last year of development – take a look here.

More information about the title can be found on the official website: chernobylgame.com.

CLASH ROYALE PARTNERS WITH JIO FOR A 27-DAY GAMING TOURNAMENT

The Greatest Casino Cities in the World